Yes, you did read that title right! There are some women who experience an overwhelming urge to eat soil during their pregnancy. Seriously.

But is it normal? Is it healthy?

Well, it is a craving that is reported, but is it safe?

Eating soil is common in some African countries and is mostly done by women who are either currently pregnant  or who are breastfeeding.

This eating soil business actually has a medical name – geophagy.

In Africa, where the habit is most common, around 30% to 80% of women have done it, and some even eat up to 400g of the earthy stuff per day.

You might be shaking your head and wondering why on earth being pregnant would lead you to the back garden for a nibble of the brown stuff, but these unusual cravings for non food items (known as pica) are often down to a deficiency in certain vitamins and minerals, mostly iron.

We all know that during pregnancy iron deficiency is a common problem.

Of course, supplementation is often prescribed in order to right the issue so there really should be no reason to eat a bowl of dirt, right? 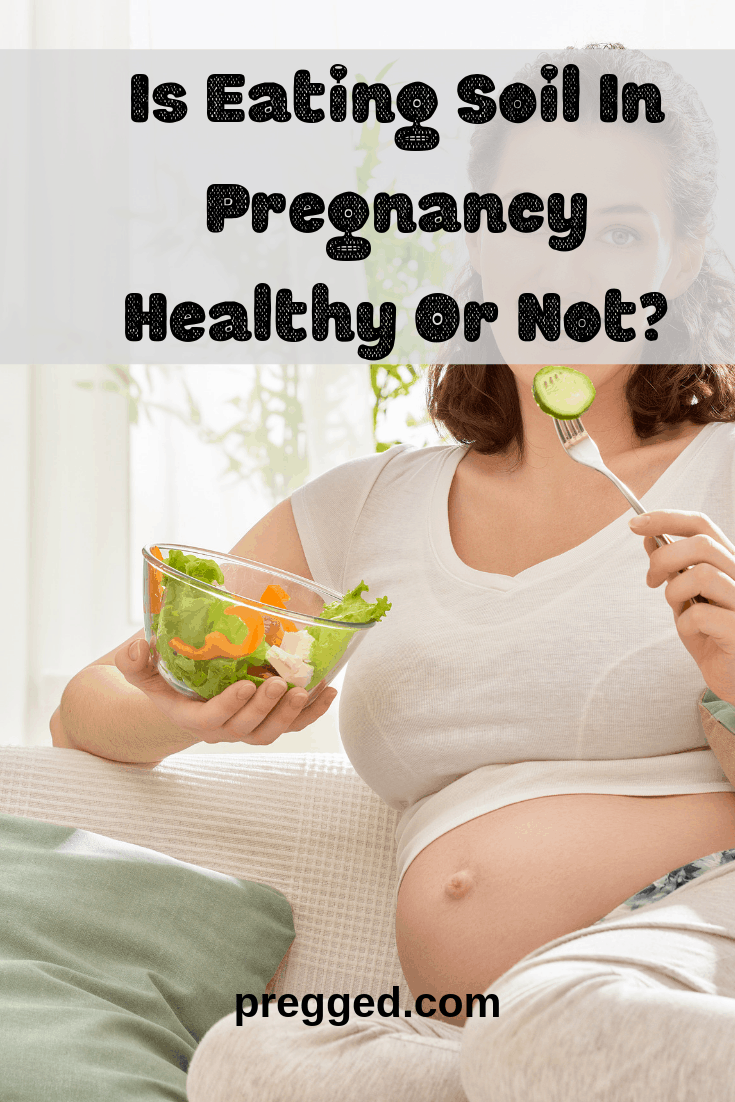 Why on Earth Would You Want to Eat Soil?

Now, if you’re reading this and thinking ‘yes, I could really eat some soil right now’, don’t worry!

A quick visit to your midwife or doctor will right the problem, and it’s simply the case that you need some vitamin replacement to knock this rather strange craving right out of the park.

Despite that, understanding why some women feel the need to consume soil is quite an interesting thing to learn about.

A study undertaken by MedUni Vienna showed that the craving to eat soil is down to the detoxifying effect that the soil can have on the body.

The study showed that once the women had consumed soil, they became almost addicted, and that it became almost like a chocolate-reward.

Okay, so it’s the same color, but would you take a bowl of dirt over a bar of milk chocolate?

Eating soil did have a few advantages, the study found. These included binding toxins, helping with diarrhoea issues and also helping with heartburn symptoms during pregnancy.

A few women also stated that it helped with their morning sickness.

Nowadays, predominantly in South Africa, eating soil has become almost an addiction, and it is something which cannot simply be stopped overnight.

A woman needs to be slowly weaned off the habit, otherwise irrational anger can occur.

As you can see, it’s very much like a chocolate addiction when you look at it that way!

Is it safe to eat soil in Pregnancy?

If soil is consumed from a very clean area, there aren’t any true health complications or risks, but how can you ever be sure that the soil is clean?

Many health professionals state that the safety of eating soil is questionable at best.

Eating “Mati”, a clay type of soil, is commonplace in South Africa but it can be dangerous.

Not only because of is prevalence, but also because the soil in that area is high is mercury and lead. Both of these are harmful to unborn babies, as well as being harmful to an adult in moderate to large quantities.

In addition to this, you never know whether the soil has been contaminated by other outside influences, such as pesticides and other nasties which have been transported by rain or other water sources. You simply can’t be sure what is in that soil.

And whilst it might seem like it is as natural as can be, having come from Mother Nature herself, eating soil simply isn’t something that is at all advantageous for you or your baby.

You’re running the risk of contracting a nasty bacterial infection which could be transmitted to your unborn baby and cause unknown harm.

What Should You do if You Get The Urge to Eat Soil?

The best advice? Don’t start eating it, and you won’t have an issue when trying to stop.

Eating soil is strangely addictive, and addictions, no matter what they are, aren’t something you need to deal with at any stage of your life, least when you’re pregnant.

If you’re noticing this strange urge the best advice is to head to see your midwife or doctor.

Don’t worry about telling them, they have heard it a million times before!

Your body is likely to be crying out for a particular vitamin or mineral which it is currently lacking in, and you can be prescribed a supplement to sort the problem out – no gardening required.

As mentioned before, iron deficiency is the most likely reason that pregnant women have a craving for soil.

This is a common problem in pregnancy regardless of an urge to head to the garden, and it can be sorted out so easily.

Iron supplementation is given to a lot of women routinely during pregnancy and it will simply be a case of taking one tablet every day (or whatever amount you are prescribed).

From there, your cravings should disappear, and your anemia symptoms will quickly resolve.

Pregnancy sure does throw up some weird and wonderful cravings and conditions, but had you heard of eating soil before reading this? The chances are, you hadn’t!