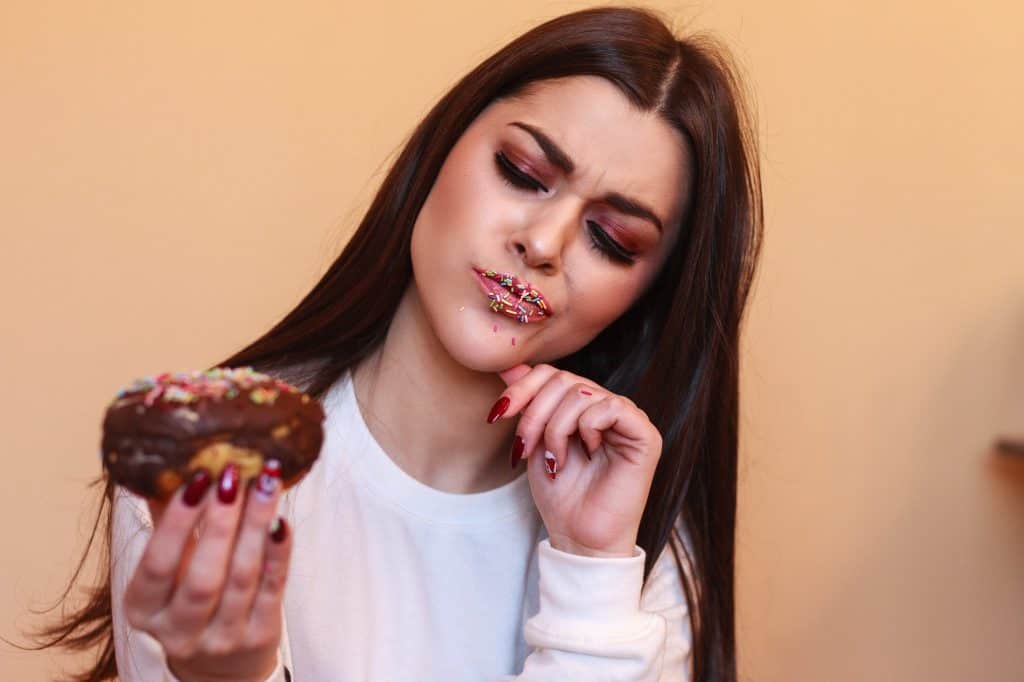 Are you suddenly eating everything in sight and wondering if it’s a sign of pregnancy? The truth is a ravenous appetite CAN be an early pregnancy symptom. Read on to find out if you have any other common signs of pregnancy to go along with it.

There are many common pregnancy symptoms, most of which begin to show themselves within the first couple of weeks of pregnancy, and then often increasing in intensity for a few weeks after that.

It’s often the case that many of them settle down as the second trimester arrives, but that first trimester can be really tricky.

The problem with pregnancy symptoms, in general, is that there are so many of them, and they affect women to various different degrees.

There is also the possibility that they won’t affect a woman at all – there are cases where women have sailed through pregnancy and not noticed any side effects of growing a child within their womb at all.

One of the common symptoms that many women notice within the first few weeks of pregnancy, and sometimes even before they realize they are pregnant, is a constant need to eat – everything and anything.

So, is constant hunger an early sign of pregnancy?

Yes, it definitely is for some women. During the first trimester some women report wanting to eat, eat, and eat, and even then, they want to continue eating because they don’t feel full.

If you’ve ever been on the contraceptive pill, you might have noticed this feeling before, and it is all down to that rush of hormones.

Your metabolism, your appetite, and everything else to do with hormones are totally racing and out of whack when you are pregnant and your body has no idea what is going on for a short while until it manages to get a handle on everything and right itself.

During that ‘up in the air’ period, also known as the first trimester, your body has a massive surge of hormones, and this does nothing for harmony.

It is for this reason that most of the symptoms noticed in pregnancy occur during the first trimester itself. Your body is not used to having this massive hit of hormones in one go and it needs a little time to adjust. Once it has done so, the waters calm a little.

During that time, you might notice that you want to eat everything, and you’re craving foods that you never even wanted or liked before. These hunger pangs can come on at any time so don’t be surprised if at 3 am you suddenly get an overwhelming craving for Mc Donald’s.

There is one thing to make you feel better though – it’s totally normal, and it will settle down. So, to answer the initial question, if you can’t stop eating, yes, it could be a pregnancy symptom, but, it isn’t the only one to consider.

Just because you have noticed you have an increased appetite, this doesn’t necessarily mean you’re pregnant as a sign on its own. If there is a chance you could be expecting, noticing you want to eat more is a good sign, but there are other very early symptoms of pregnancy to be on the lookout for too, including:

• Tiredness, which can be extreme
• Feeling washed out and totally fatigued in general
• Sore and tender breasts
• A missed or late period
• An increased sensitivity to smells
• Those cravings we were just talking about
• Feeling emotional
• Mood swings
• A metallic taste in the mouth
• Nausea and sickness – this can be at any time of the day, not just in the morning

Normally the first sign of pregnancy that a woman notices is a late or totally missed period. This is usually what prompts a woman to take a pregnancy test.

Not everyone notices this first, however, because if you are on birth control, e.g. you’re taking back to back packets of the contraceptive pill and you miss one, you won’t have that withdrawal bleed, so you might not notice until a month later.

Before that time, you’re likely to notice the symptoms setting in, so probably feeling very nauseous, feeling extremely tired, moody, increased appetite, and perhaps noticing smells much more strongly. In that case, you should take a test as soon as you think pregnancy could be a possibility.

Healthy Diet in Pregnancy – What You Need To Eat

If you are noticing that you want to eat a lot more regularly than normal it’s important to watch what you eat. You may regret grabbing unhealthy choices to satisfy your hunger later down the line.

Pastries, sweets, cookies and ice-cream may be highly appealing but you’re likely to be hungry again a short while later anyway.

The lack of nutrition and the high level of sugar contained within these foods might increase your weight too much. They could even put you at risk of gestational diabetes. Pregnancy doesn’t give you the green light to eat everything in sight.

You can definitely treat yourself a little but at the same time you need to remain healthy and give your baby the right nutrients he or she needs. It’s also vital to try and keep within a healthy weight during pregnancy so that you don’t have a massive hill to climb diet-wise after you deliver.

Obesity in pregnancy can cause complications and at delivery so that’s something else to keep in mind. Remember to have regular exercise too although do check with your midwife and doctor that what you’re doing is safe.

Exercise should be gentle and not too prolonged. Make a note of the foods you should avoid during pregnancy, and instead chow down on the ones that are recommended.

If you can do this, you can snack on the good things, satisfy your appetite and avoid putting on too much weight during these long, nine months.